I am now in Berlin!

When I first got into Berlin, I kind of had a strange feeling, but after a couple minutes I realized,  it was that I wasn't in Egypt anymore! I know it sounds stupid, of course I knew I was in Germany, but it was so strange because it was at that point that it hit me how different Egypt really is. For example, when I was in Egypt I didn't really want to go into any stores or restaurants (at least not alone) because they didn't look safe, there were hardly any that looked clean, and the shop keepers were extremely pushy. But then when I was walking from the train station to my hotel in Berlin, it was the first restaurant I saw and I had this feeling like I should go eat there because it looks really clean and I might not come across one like this again for a while! In the back of my head, I had the mentality I was still in Egypt!

Anyways... while in Berlin for 3 days, we went to the Sachsenhausen concentration camp. Where 20,000 people were imprisoned, and which were mainly political people. Inside the camp you can still see sites like the gallows, barracks, prison, kitchen, watch-towers, and at the back of the camp through a gate is a mass grave site for the victims. A concentration camp is possibly the most solemn place you will ever visit in your life. It's the only "tourist" site I've ever been to where there were loads of people but everyone was so quiet it was as if there was nobody there at all. 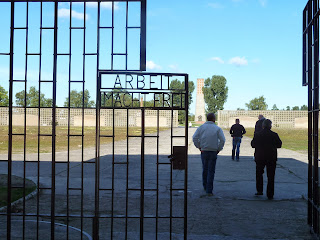 There was a quote on one of the walls near a statue as a memorial for the victims that I took a picture of - "And I know one thing more - that the Europe of the future cannot exist without commemorating all those, regardless of their nationality, who were killed at that time with complete contempt and hate, who were tortured to death, starved, gassed, incinerated, and hanged..." - Andrzej Szczypiorski, Prisoner of the Sachsenhausen Concentration Camp, 1995.
.......

Our main points of Berlin included a walking tour throughout Berlin, going to a few museums, seeing parts still left of the Berlin Wall, going to the Brandenburg Gate, and to the Holocaust Memorial. 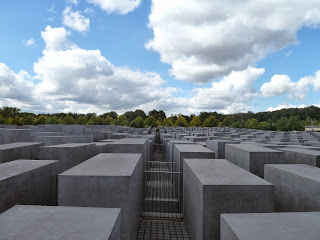 After Berlin, we drove to the capital of the Czech Republic, Prague. Wow, this is such a very beautiful city! The Vltava river runs through the city and is covered with many large beautiful bridges. You can get an incredible view of the entire city and river by going up to the Prague Castle, where the President of the Czech Republic resides. Other than the Prague Castle and it's view, I recommend going to the historic Charles Bridge and the famous Astronomical Clock. While out at night, make sure you go to the river bank and check out the Prague Castle all lit up, it looks so elegant! Rather than going to museums or talking a guided tour, I opted for just doing my own thing walking around Prague and seeing where the paths took me, which I really enjoyed. 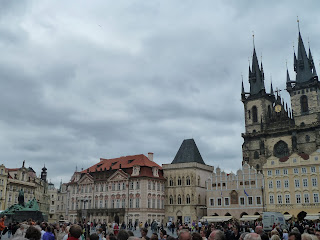 Once in Prague, you definitely start to realize a more Eastern European way of life - in the architecture of the buildings, the prices of goods and services are cheaper, and not everything has been modernized like in Western Europe. It is quite interesting to see these differences for yourself.