Egypt ... 'Where it all begins' continued


Egypt so far has been amazing, it's so much more than I expected it to be! This week, we've been busy checking out some of these ancient temples throughout Egypt....


Kom Ombo Temple
Inside Kom Ombo Temple, there are hieroglyphic writings on the walls which is proven evidence of the first Egyptian calendar. Lines drawn represented new days and circles represented the sun rising. This is how they knew what day it was, in what month, and when it was a new day!


Edfu Temple
Edfu Temple is possibly the best preserved temple in all of Egypt! At the back of the temple you will find an original metal boat and shrine. The metal boat was used by the people to bring offerings for the god of the sky Horus, to either approve or disapprove their offerings. 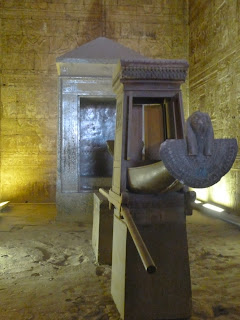 Luxor Temple
Luxor Temple is like a palace filled with magnificent columns and statues! In front of the temple is the Avenue of Sphinxes, which is a 3 km long stretch with statues that have the head of a human and body of a cat. You will notice the sphinxes stop at a road, and on the other side of that road they are excavating large gaps because they believe that there are more sphinxes under the ground which are undiscovered and they believe that they link Luxor Temple to another called Karnak Temple. Our group leader told us they have even evacuated people out of their own home and destroyed them to excavate underneath and that currently there is a big debate because there are 2 big religious sites, 1 church and 1 mosque, that they want to tear down in order to excavate under to find the remaining sphinxes. History and culture or religion? What's more important.... That's not a debate I want to be a part of. 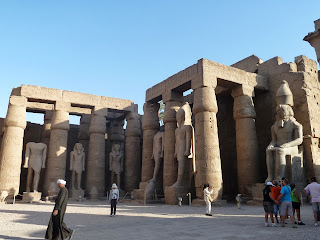 Karnak Temple
Karnak Temple is huge! It has 8 different entrances, and there is even a water reservoir inside the gates of the temple. At the end of the temple there is a statue of a Scarab beetle, which is a symbol of good luck in Egyptian mythology. So rumour has it, that if you walk around the statue counterclockwise 8 times you will have good health and luck for the rest your life! A lot of people were doing it – so we joined in too!

The Valley of the Kings
The Valley of the Kings is totally incredible! Unlike all the temples we visited, it was built in the middle of the desert, on the west bank of the Nile, in behind the mountains as to protect the tombs. It has 63 tombs including the mummy of King Tut. I highly highly highly recommend going to the Valley of the Kings while in Egypt because this was a truly authentic tourist attraction - there is no show being put on simply to impress the tourists here. Going into these tombs where pharaohs are buried is a completely surreal experience.

A lots of the temples still had their original colorings... mainly bright blues and reds. Although you notice a lot of damage done by flooding of the Nile.

Almost everything represents something in Egyptian culture,


- a drawing of the Egyptian eye is for protection


-the Lotus flower serves as the symbol of Upper Egypt and the Papyrus flower for Lower Egypt
- the Ankha has a straight vertical line to symbolize the Nile River and a loop to symbolize the Delta, then it has a horizontal axis like a cross to symbolize that the river is giving life to all of the land from the Nile to the Delta

Yesterday we went to the Mosque of Muhammad Ali. Out of respect and tradition, we had to take off our shoes before entering and all women have to cover their arms and legs while inside. It’s very very beautiful inside. There was a huge chandelier in the center and 365 hanging lights (one for each day of the year). The women and men each had separate areas to pray. I learnt that in mosques the wall the people pray to always faces towards Mecca in Saudi Arabia. Therefore here the people pray towards the east but any mosque east of Saudi Arabia will pray to the wall of the west. 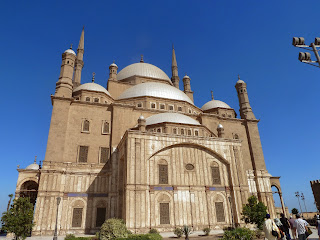