From the moment I landed in Egypt, it took me by complete surprise. When people talk about having a 'culture shock', well this was that place for me. 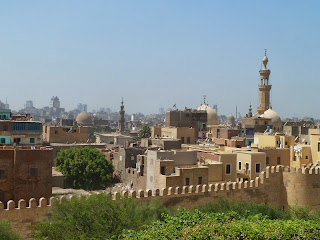 The first day in Cairo we went into the city, and it was somewhere just above 40˚C that day, so I decided to wear shorts and a tank top because for me that was absurdly warm! However, in predominantly Muslim countries like Egypt where the culture is quite conservative, nearly all the local women wear Burqas, covering their skin from head to toe. Despite the fact I knew this, I made the decision to still dress in my shorts and tank top... which I regret having done because I was ignorant to respecting this part of their culture. Also, by dressing the way I did I had a lot of attention drawn to me from both men and women... attention that I didn't want or need being a tourist. This unwanted attention got too much for me that later while we were at a small bazaar I bought a cotton scarf to put over my chest and shoulders. Once I did this I noticed that I wasn't getting anymore whistling by the men or stares from the women. After covering my bare skin, I felt more as though I could blend in.

Our second day in Cairo we went to the Pyramids of Giza. Two words: absolutely incredible. One of the highlights while visiting the Pyramids was going inside. You can go inside Kahfre's pyramid (the middle one) to his burial chamber for an additional fee of something like $6. You enter in from the second row of blocks and go down a ladder for about 40 feet in a tunnel about 3 feet wide, and then the next 40 feet you go up a ladder until you reach a massive room that has a scripture on the wall and an open tomb of where the famous pharo's son was buried. This was such an awesome experience, but not recommended for those who are at all claustrophobic! 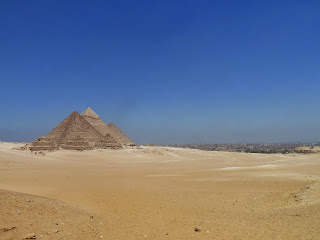 All around the Pyramids you can find people selling camel rides. After having done it, I would say that I do think it is worth it and it's pretty safe, however just make sure to check yourself afterwards for ticks (especially if you are wearing shorts or capris), because I found a tick on the back of my leg after I had jumped off the camel. Luckily though, it was only on the surface of my skin and I was able to flick it off right away.

No visit to Cairo is complete without going to the Egyptian Museum. Here you can see thousands of pharaonic artifacts, royal mummies, and even the mask of King Tut. I quite enjoyed this museum!

The people of Egypt are very friendly however many of us on the tour experienced something we were not used to - people expecting you to tip/pay them for everything, and sometimes (more often than not) they came across quite rudely about it. Some were for normal things like the bellman at the hotel but the bellman at my first hotel in Cairo had actually just taken my suitcase out of my hand and brought it to my room without me even asking him to, and when I got into my room, the man was standing there refusing to leave until I tipped him. This I did not appreciate given I was rooming by myself and a female.

Then yesterday we took the train from Cairo to Aswan, and when I got off the train we had to go down a few stairs to go to another platform, and when I went to put down my suitcase handle and carry it by the side handle in order to get down the stairs an old man (who was waiting at the top of the stairs) came up to me and put his hand right over top of mine and quickly swung my suitcase up on top his shoulder and just started carrying it down the stairs infront of me. I thought this man might be running off with my suitcase, so I chased him down the stairs, and when we got to the bottom, I tugged on my suitcase and had to tell him to put it down, and when he did he put out his hand and asked for a tip! I was so mad because I had not asked him or implied I wanted him to do that and he just took it upon himself to do it and wanted me to pay him! I said “no, I didn’t ask for this” and he stood there with his hand still out and gave me an angry look. I just grabbed my suitcase and continued walking with the rest of my group. Many of us on my tour have experienced this.

Make sure to check out some bazaar's while in Egypt, but be prepared to bargain! You'll find the shopkeeper quote you a price and you can always bargain it down lower! If they act like they won't take you lowest offer, all you got to do is start walking away and they will practically sell it to you for dirt cheap. Also, be prepared for some to literally stand in your way and not let you pass until you come into their shop. Many of them will lure you in with “come on, it’s free to look” and as soon as you leave after looking in their shop, they will literally follow or chase you down the street until you have to repeatedly ask them to leave you alone or until you get really frustrated. One girl on my tour was looking at a belly dancing costume and when she left without buying anything, the man chased her down the street holding the manikin in his arms! Also, be careful when they use their young and cute children to try to sell you anything they can.

Safety is pretty good right now in Egypt. There are police and security literally on every street corner and in every building. I’ve even had to go through a metal detector at all my hotels and each tourist site.

Some of our other sights in Egypt included
- the High Dam, which has the largest man made water resevoir in the world
-the unfinished obelisk, which was basically an obelisk not yet completely carved out from the rock but totally unusable anyways because of a massive crack that has formed

The final part of our tour in Egypt is on a 5 star cruise up the Nile River from Luxor to Cairo. The cruise is not your typical "North American" cruise as it only holds about a 150 passengers. The one we are on though is beautiful - so modern and clean, and all of the staff are extremely welcoming and helpful. For anyone wanting to see Egypt in a different and unique way, try one of their river cruises... this is the kind of views you can expect! 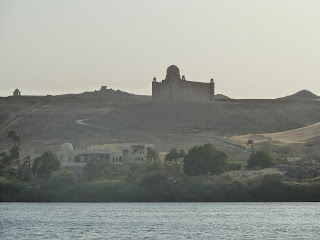 Anywhos, that’s all I have to update for now
salām! (goodbye)
Posted by brittany at 11:50 AM