My last morning in Rome I went to the Cappuchin Monks which is a crypt made up of bones from 4000 friars and monks. I found it sort of cool and weird at the same time, but this is a definite no-no for those who get spooked easily.

Rome was an incredible experience. It was a place that I was literally asking myself “where am I?” because everything there is just so historic and the culture is well represented in it's  architecture and design. I could never see these sort of things in Canada because they would be so out of place!

From Rome we travelled to Pompeii where we had a guided tour of this ancient city where several villas of people were killed when Mt Vesuvius erupted in AD 79. There are a large amount of artifacts that have been well preserved and even some bodies of humans where you can see them actually covering their faces and trying to protect themselves from the hot lava. Seeing this, it's very hard to imagine what that day was actually like. 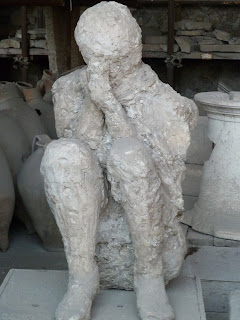 We were only in Pompeii for one day, and then we went to the port of Brindisi to catch our overnight ferry to the island of Corfu, Greece. Olives, feta cheese, souvlaki, tzadiki, and more olives, here I come!

After our overnight ferry, we arrived in Corfu and drove to our hotel which ended up being right across the street from the beach! I only had one day in Corfu because I was leaving early to catch my second Contiki tour through Egypt.

Before my flight to Cairo, I went into the center of Corfu and grabbed some lunch. If you go to Greece, you cannot pass up a Gyro! I had one with chicken souvlaki, tomatoes, onion, tzadiki and then they put french fries inside this cone shaped wrap with some sort of gravy drizzled on top... it was so so delicious!

Here's one of these moments when you're on holiday when somebody says or does something nice that just makes your trip that much more special... it's these little moments I don't want to forget. So I ended up taking a taxi to the airport, and on the way my driver asked me where I was from and when I told him “Canada”, he held my hand and said “you are the most wonderful people, it’s a pleasure” and he shook my hand with a massive smile on his face. I found this to be such a sweet moment because the man was so genuine and kind, and this was something I really appreciated.

So now, I'm off from Greece and heading to Cairo, Egypt!
Posted by brittany at 3:20 AM