Yesterday morning we left London, took the ferry across the English Channel from Dover to a port in France and from there drove to Paris. Along the way, we passed the Canadian National Vimy Ridge Memorial, which is stunningly magnificent not only because of it's size but also because of the solemness I felt just looking at it.

After arriving in Paris in the afternoon, we toured all the most notable sights by coach. We then stopped at a little french restaurant near the Orsay museum for some escargot, along with champagne and a selection of french cheeses. This was my first time having escargot and I say it tastes kinda like garlic! Even though I love garlic, I don't think I could willingly eat an entire plate of them, knowing that I'm actually eating snails. In this case, it's matter over mind!

This morning the group went to the Palace of Versailles but I didn't have much interest to go there since I've seen the palace's replica in Vienna - Schönnbrunn. Instead I caught a bus into the city and then took the RER train and got off near the Notre Dame cathedral. This is such a beautiful cathedral that I could spend hours starring in front of it just trying to interpret all the illustrations around the doorways and what they might symbolize. 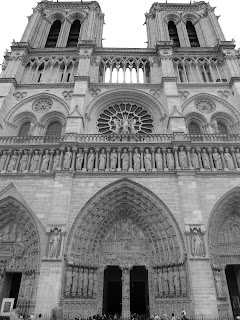 I wandered down from the Cathedral along the Seine river to the Louvre museum. I've been inside the museum before and would've liked to go inside again to see some of the other exhibitions I didn't get to see before, but the line ups were seriously hours-long and I didn't not have a lot of free time in Paris.

From there though, I walked through the Tuileries, past the Egyptian Concorde, and finally onto the infamous Champs-Elysees taking a ton of pictures along the way! All together, this walk took me about 4 hours, but this was a rather leisurely walk with quite a few stops along the way to take in some of the smaller treasures that Paris and it's people have to offer. 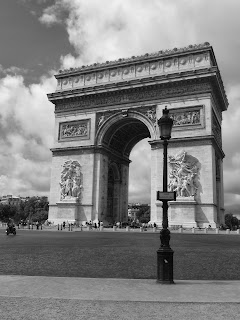 Tomorrow I plan on walking up the Eiffel Tower (approx 600 stairs), which can only be done up to the 2nd level and from there I must take the elevator. Hopefully I'll have some good weather tomorrow like I did today!